Laser technologies is commonly used in various industries. Now femtosecond laser, as an ideal light source for applications such as high-end micro-nano fabrication and life science, has been widely used for industrial micro-processing and medical precision surgeries.

Femtosecond laser is with pulse width <1ps. Usually when laser interacts with materials, electrons absorb photons and jump to a higher energy level within a time period of 100 fs, then the electrons will transfer energy to the lattice in less than 1 ps to achieve a balance status, and this energy will be gradually transferred to the interior of the material in less than 10 ps. For femtosecond lasers, since pulses are very short, the electrons don't have enough time to transfer energy to lattice. Thus, the process is different from the linear absorption in traditional laser machining process. Femtosecond laser micromachining mainly involves multi-photon absorption, only areas with irradiation exceeding the multi-photon absorption threshold will have an obvious processing behavior. Therefore, based on the light-intensity dependent of multi-photon absorption, femtosecond laser machining can achieve precision machining result with sizes smaller than the focal spot.

Based on characteristics such as extremely narrow pulse width, energy concentration and short thermal diffusion time, femtosecond laser is with ultra-small damage and strict spatial positioning, which is very suitable for ultra-fine cutting of biological tissues. Especially in glaucoma surgery, retinal imaging-based hyperopia surgery, cataract surgery and other eye surgeries, femtosecond laser works with corneal tissue through a kind of photodecomposition phenomenon. In that way tissue becomes plasma under function of femtosecond laser, since electromagnetic field intensity produces by the plasma is much larger than forces exists between nuclei and its surrounding electronic, that eventually makes tissues blast into tens of thousands of tiny air bubbles through light cracking, and finally be precisely cut. Femtosecond laser can make the corneal flap with highly accurate thickness and decrease the probability of causing corneal flap complications. The principle is shown as follow:

Before surgery, doctor inputs the patient's basic information and surgical data into the computer (including the depth of laser focus, which is the distance from the bottom of the cone lens to the laser focus; corneal flap diameter, pedicle size and width; laser cutting energy, etc.) During surgery, the doctor operates a femtosecond laser machine, fixes the cornea by a cone mirror, keeping the distance precise between the laser head and the focus spot in the corneal tissue.

The depth of the laser focus, which is the distance from the bottom of the cone lens to the laser focus spot, the femtosecond laser machine transmits the laser pulse according to the mode set by the doctor, and performs various targeted cutting on the cornea. In brief, what impresses us most about the light transmission of femtosecond laser is the precise orientation and positioning of the light transmission. 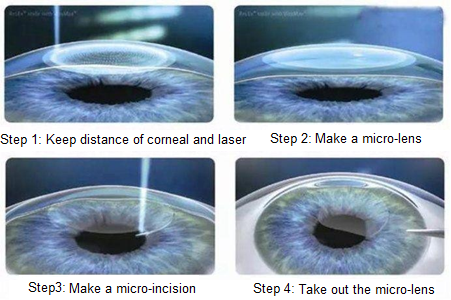