In recent years, the research and application of terahertz technology have shown significant technical advantages and industrial prospects in food/drug testing, security equipment, medical diagnosis, semiconductor material damage detection and many other fields. The advent of ultrafast fiber lasers has further accelerated the commercialization of terahertz technology. Compared with the complex and huge volume of lamp pumped terahertz gas lasers and the expensive price of Ti:sapphire laser, ultrafast fiber lasers are favored by the market for their advantages of high integration, small size, simple operation and easy batch operation.

Terahertz (THz, 1012Hz) usually refers to the electromagnetic wave whose frequency is within the range of 0.1~10THz (corresponding wavelength is 3 mm ~ 30 μm). In the optical field, it is called far infrared, while in the field of electronics, it is called submillimeter wave, ultra-microwave, etc., which is between microwave and infrared light in the whole spectrum. The main characteristics of terahertz compared with other electromagnetic waves include:

(3) Fingerprint spectroscopy: the absorption spectrum and dispersion characteristics of many organic molecules are located in this region, and the terahertz spectrum of each material contains rich physical and chemical information.

Thz-TDS system is a terahertz generation and detection system based on coherent detection technology, which can obtain the amplitude and phase information of terahertz pulse at the same time, and directly obtain the optical parameters such as the absorption coefficient, refractive index and transmittance of samples by Fourier transform the time waveform. The terahertz time domain spectrum has high detection SNR, wide detection bandwidth and high detection sensitivity, which can be widely used in the detection of a variety of samples.

THz-TDS technology is a new spectral measurement technology developed in the 1980s. This technique uses the wide band terahertz pulse obtained by femtosecond laser technology to reflect through or from the sample, measure the resulting terahertz electric field intensity over time, and then obtain the sample information. This measurement technique is mainly used to detect the properties and physical phenomena of the material between far-infrared and microwave.

The typical terahertz time domain spectroscopy system is mainly composed of three parts: ultra-fast fiber laser, terahertz emission and detection device and time delay control system. Such as sketches, place the sample in the light path of terahertz time-domain spectroscopy system. The time domain waveform of terahertz wave before and after the reflection of the sample was collected and converted to the frequency domain by Fourier transform. Some optical parameters related to the measured sample can be tested through the analysis and processing of the two sets of frequency-domain data, such as refractive index, absorption coefficient, etc.

Rainbow OEM series femtosecond fiber laser developed by NPI lasers can provide two wavelengths of 1550 nm and 780 nm, which is specially designed and developed for commercial terahertz system integration. Both products have passed the strict industrial test standard, with the advantages of high stability, reliability, maintenance free, easy integration, etc., and are the ideal laser source for the current terahertz commercial system. 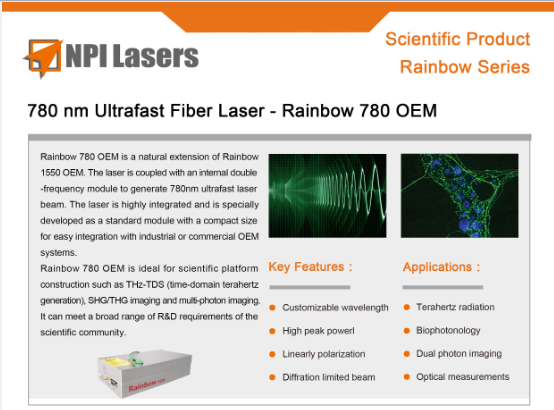